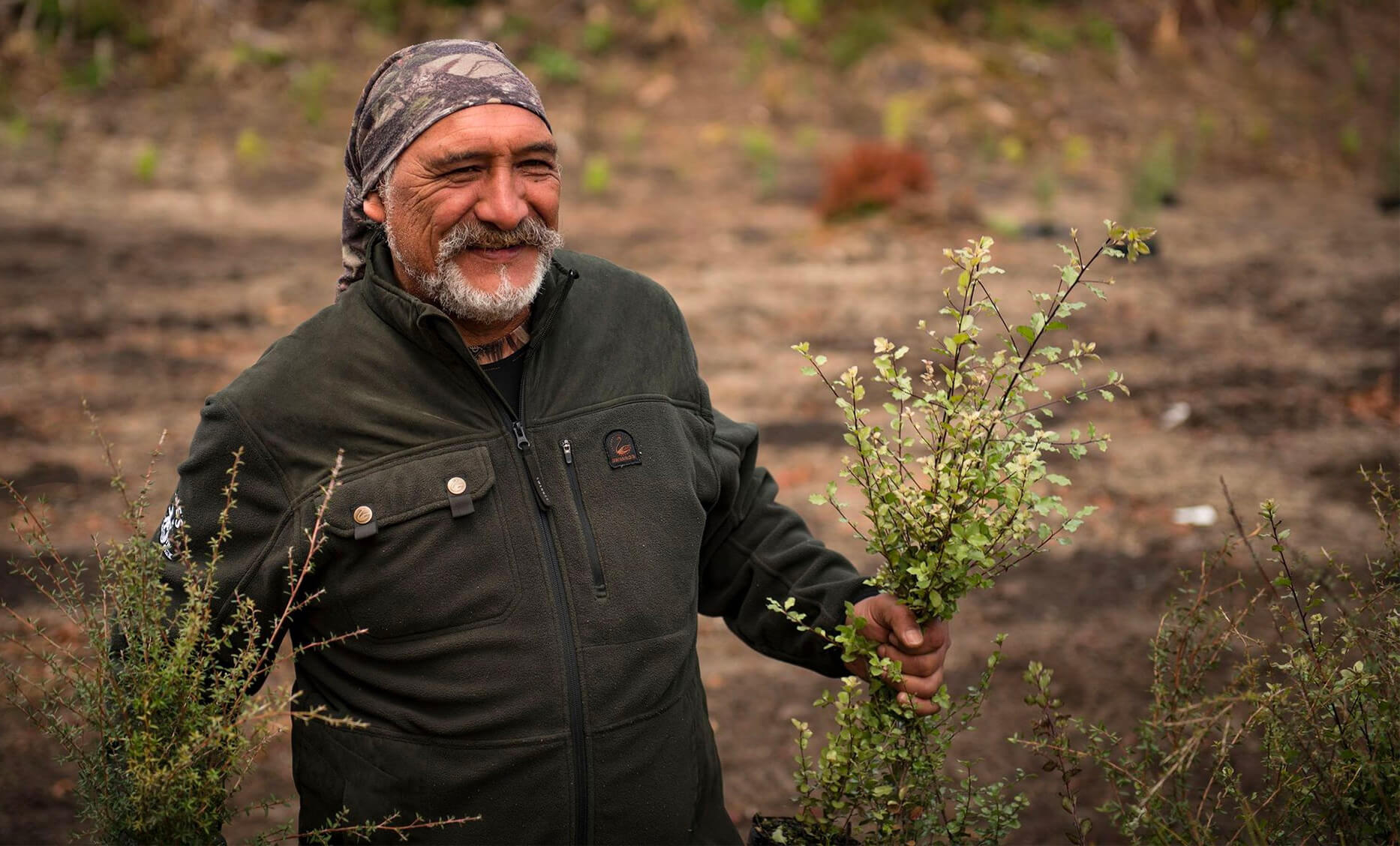 Creating a movement with Trees that Count

Until Trees that Count was established in 2016, New Zealand had no way to capture the official native tree count. Now we do. So far we know there are over 31.8 million native trees in our country, which over the next 50 years have the potential to remove 5–7 million tonnes of carbon dioxide from the atmosphere. Since the programme began, New Zealanders have purchased 500,000 trees at $10 each, which has generated $5 million to put back into the project. This is just the beginning…

The Trees that Count (TTC) programme is managed by Project Crimson, a conservation charity that has been championing native tree planting since 1990. It brings together businesses, communities and everyday Kiwis with the vision of helping plant 200 million native trees across Aotearoa over ten years. The Tindall Foundation (TTF) is a founding supporter of Trees that Count; Sir Stephen Tindall has always been a strong advocate for the environment. Realising the massive potential of trees to sequester carbon in New Zealand and help with climate change, Stephen challenged Project Crimson to take on the TTC project, and TTF put funding towards a goal of 200 million native trees by 2030. He had been instrumental in setting up TTC after being inspired by Project Crimson’s Living Legends project, which saw 170,000 native trees planted across 17 locations throughout New Zealand. Each region was dedicated to a regional rugby legend, leaving a living legacy to celebrate New Zealand’s hosting of the 2011 Rugby World Cup.

What is the aim?

Originally the aim was to maintain a simple count of all the native trees that were being planted around the country, and explore ways that could contribute to achieving New Zealand’s international climate change commitments. From the great work done by Tāne’s Trees Trust we assumed that there were already about 10 million native trees being planted each year. But no one was counting them in a way that would let the nation realise the benefits from that effort. That included responding to climate change, as well as the wider benefits from restoring and enhancing our environment — habitat preservation, increased biodiversity, improved water quality, reduced erosion, recreational opportunities, cultural and spiritual value, and community building.

Given the goal, developing an efficient way of collecting data was integral to achieving it, as was setting up a means of connecting tree growers, landowners and planters. TTF funding provided the catalytic investment to kickstart the programme, but the challenge for the TTC team was to find a way to pay for it sustainably.

How does it work?

As well as encouraging all groups and companies planting native trees to register their trees with the count, TTC is helping to stimulate a movement of new native tree planting. To achieve that, the TTC team identified that they needed a self-sustaining connection, financial and data collection structure, and an incentive for  groups to provide data so they could get more trees into the ground.

They needed to unlock generosity and develop a reliable, financially sustainable model. Enter the ‘Marketplace’ — an online portal that connects native tree planters with  funders, enabling Kiwi businesses or individuals to invest into a sustainability programme, which in turn enables conservation groups to plant more trees. The cleverly designed system takes funding for native trees and matches the funding to planters — farmers, iwi/ tribes, schools, community groups and others — who apply for the trees. The groups must have previously contributed to the tree count to be eligible to receive those trees, which helps with the quality-control process.

Launching the Marketplace has been fundamental to setting up TTC for future success. It provides a way of generating sustainable revenue and supports commercial viability. The funding it generates can be given to community groups to help achieve the 200 million tree target. Plus there’s an added benefit — users can input and access data that is collected and collated, resulting in information that is robust and wide enough to be of significant value to our environment. This could also provide the statistical basis for future calculation of benefits, whether through carbon sequestration or other biodiversity value (or ‘credits’).

What has been achieved?

TTC has captured the public imagination, providing a simple means of helping mitigate the increasingly alarming effects of climate change, while also restoring indigenous biodiversity, stabilising soils, cleaning up waterways and beautifying the environment. In three years, almost 32 million trees native have been added to the tree count. As they grow, those native trees will help remove about 3.5 million tonnes of carbon from the atmosphere. TTC has supported 479 planting projects with over 13,000 funders and planters participating. Entering its fourth year, TTC has just achieved the mammoth milestone of 500,000 trees funded.

The TTC Marketplace has also made it simple for the public to make a difference by purchasing a tree at an affordable cost of $10. Climate change can be overwhelming for some people; through its tree-gifting programme TTC presents a safe, contactless way of gifting something thoughtful that has long-term value. Realising this, TTC invested in social campaigns that have resonated with the general public. During the COVID-19 Level 4 lockdown period in March and April 2020, TTC recorded a 175% increase in the number of people gifting native trees. They put that down to Kiwi values of generosity and manaakitanga/care for others even in times of crisis. 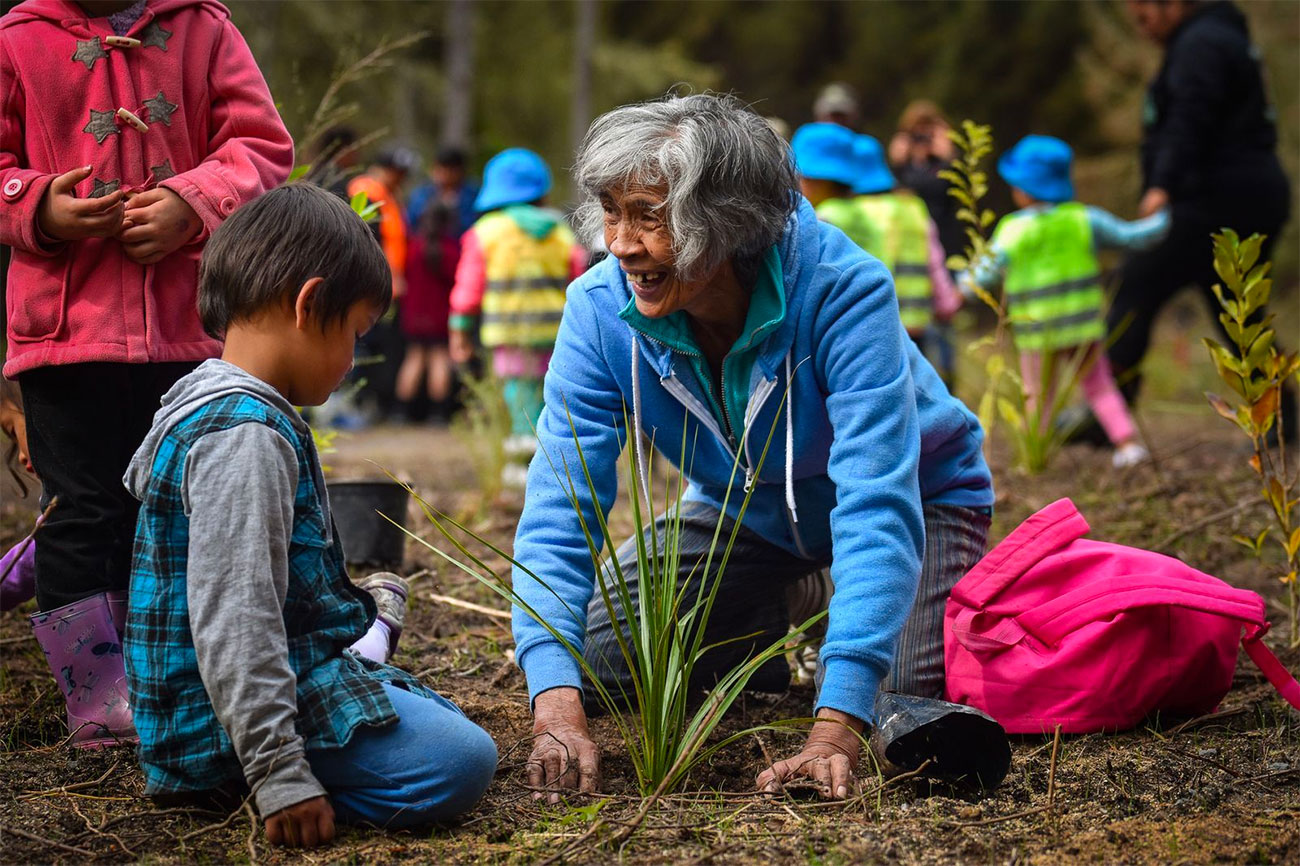 What has been learnt?

Project Crimson has learnt that being nimble and adaptable is crucial to organisational survival, especially in a start-up project. It has doubled in size, growth and activity year on year. In recognition of its early success, it has received government funding to the tune of $6.65 million over three years. Staffing has grown from five part-time contractors and a handful of volunteer trustees, to an organisation of more than 20 employees. The management team has had to redesign the organisation and hire more people. With so much planting spread across hugely diverse areas of the country, it has been vital to have the right people on the ground providing expert technical advice, conducting site inspections for potential planters and ensuring the planters’ projects have the very best chance of success. The team now includes nine regional advisors across as many regions.

An important focus is to educate and inspire youngsters to love native trees. We know that sparking wonder and affection for our native trees at an early age can fuel a lifelong passion to care for them into the future. The organisation wants to ramp up its educational programmes and help all children connect to nature and be involved. It aims to remind people why they love native trees, and bring back the feeling of nostalgia that reminds them of a summer day at the beach, or a picnic under a pohutukawa. Research has shown that people asked about their favourite tree generally relate it back to a time or place that resonates with a personal connection. Those insights have driven marketing campaigns to date.

Hopes and dreams for the future

The organisation strives for the Marketplace to be self-sustaining so it doesn’t need government or philanthropic funding. It aims to operate in a commercially sustainable way and, because of significant funding boosts, it is well placed to do that. Another goal is to increase grassroots giving so that gifting a native tree to a new baby or as a birthday gift becomes part of Kiwi culture.

Project Crimson’s current goals include being a broker of native trees, supplying data to the nursery industry about upcoming demand so that they can upscale and attract capital investment. It sees the Marketplace as a means one day to ‘save the Amazon’ — all the way from New Zealand. It also aims to create investment vehicles such as green bonds to fund larger-scale planting projects, a biodiversity credits scheme to incentivise more investment into permanent native forestry, and creative ways of demonstrating the longterm value to of native tree planting (maybe even from sustainable forestry).

Author Nelson Henderson said “The true meaning of life is to plant trees, under whose shade you do not expect to sit”: that saying sums up the Trees That Count vision. It intends to make a significant difference to New Zealand in the long term, including a future vision for flagship projects like supporting Northland to host a new DoC Great Walk, or the new 1.6 million trees project on Motatapu Station in the Otago Lakes District. In the meantime, there are some trees to be put in the ground… 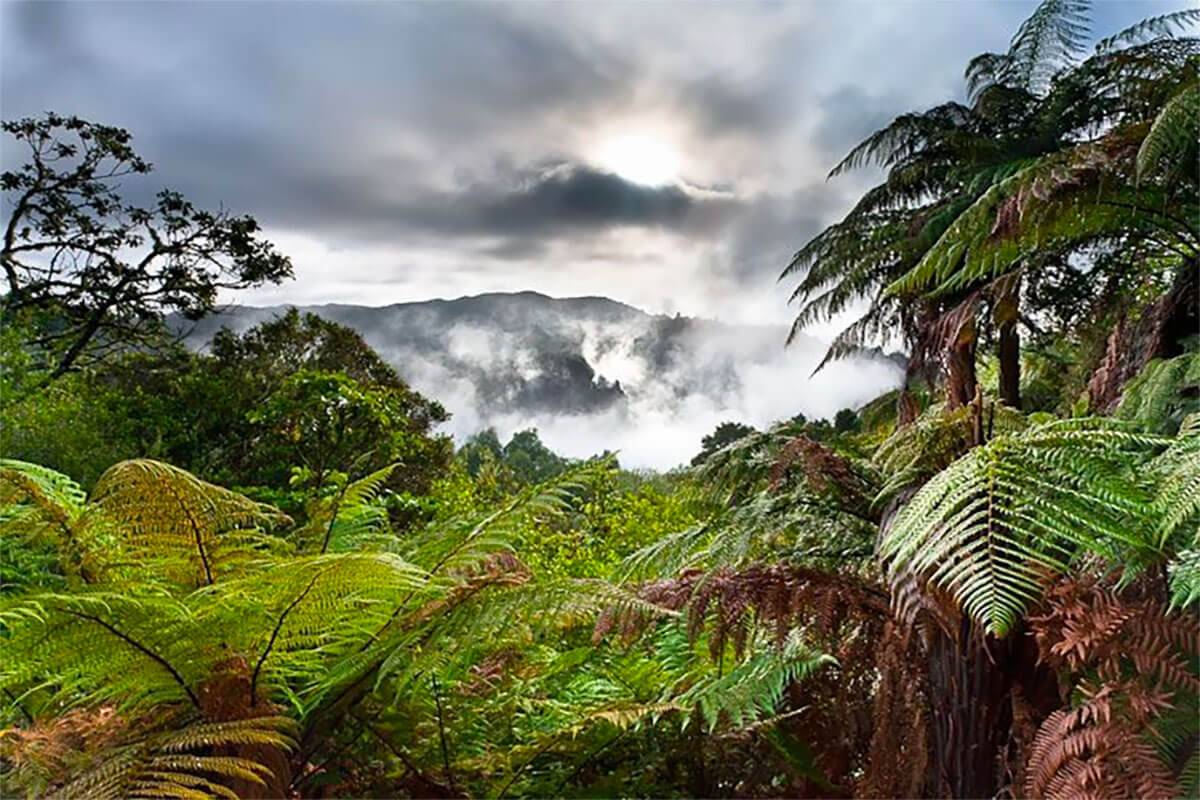 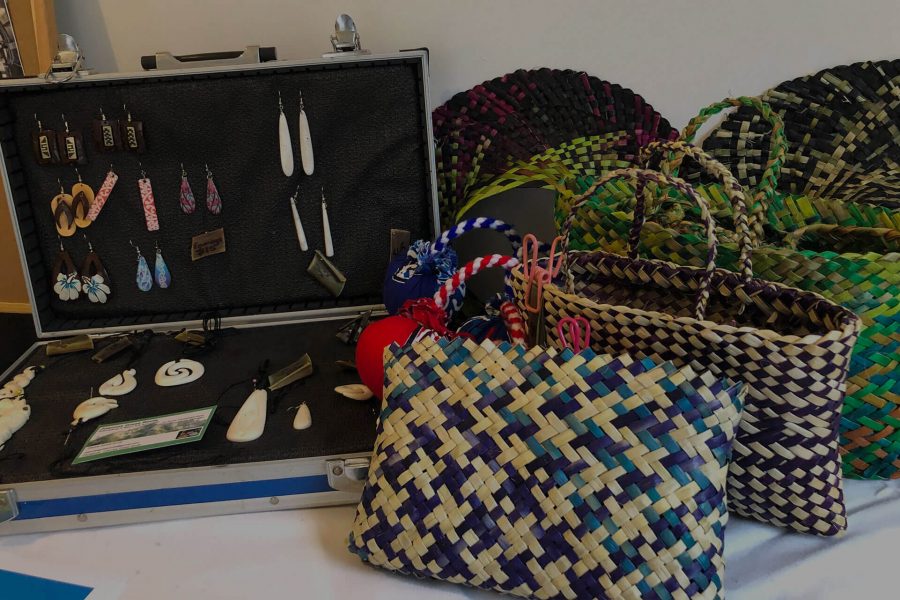 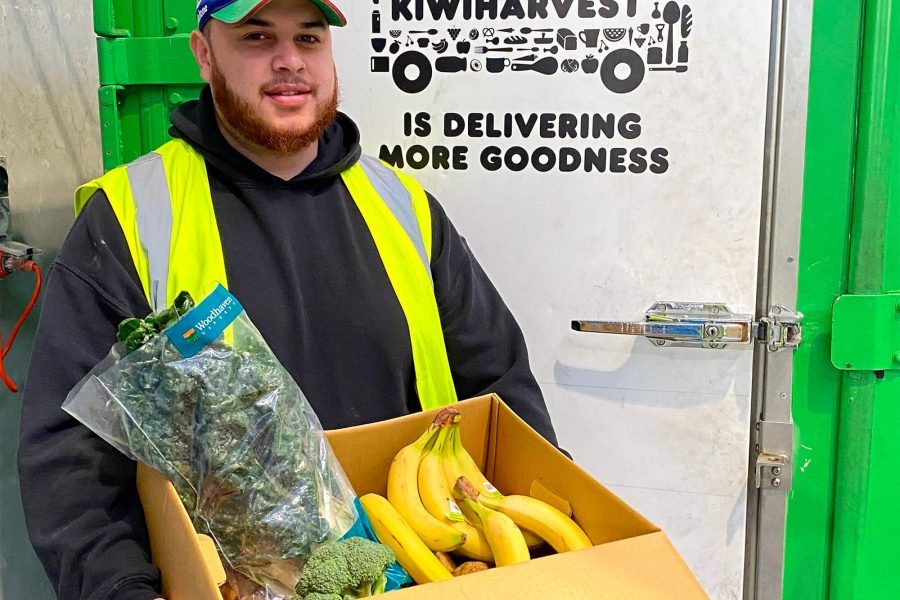 Food security during a pandemic leads to Good Kai